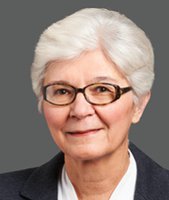 Dr. Szathmáry is a distinguished scholar, teacher, scientist, and administrator. She is Co-Chair of the Members of the Canada Foundation for Innovation and a member of the Board of Governors of McMaster University. Dr. Szathmáry has also served as a director of numerous educational, research, and philanthropic not-for-profit organizations, including the St. Boniface General Hospital, the Manitoba Museum Foundation, the Manitoba Medical Service Foundation, the CancerCare Manitoba Foundation, the International Institute for Sustainable Development, the Pierre Elliott Trudeau Foundation, the Prime Minister's Advisory Committee on Science and Technology, and the Board of Governors of the University of the Arctic.

Dr. Szathmáry received a Bachelor of Arts (Honours) and a Ph.D. from the University of Toronto. In addition to receiving the Lieutenant Governor’s Medal for Excellence in Public Administration in Manitoba, she has been awarded seven honorary doctorates in recognition of her research and contribution to higher education. Dr. Szathmáry is a Fellow of the Royal Society of Canada and a Member of both the Order of Canada and the Order of Manitoba. In 2015, she was appointed Honorary Colonel of the Royal Winnipeg Rifles.