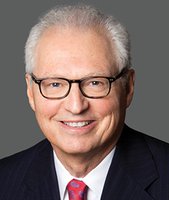 He is a director of Power Corporation and of many Power group companies, including Great-West Lifeco, Canada Life, Empower, Putnam Investments, IGM Financial, IG Wealth Management, Mackenzie and Power Sustainable Capital. He was a director and Vice-Chairman of Pargesa in Europe until November 2020, when Pargesa’s reorganization was completed. He was also a director of Bellus Health Inc. until 2009 and of CITIC Pacific Limited in Asia until 2014.

Over the years, cultural, health, and other not-for-profit organizations have benefitted from his commitment, involvement, and dedication. He has played key roles in a number of fundraising campaigns, including those of the Montreal Museum of Fine Arts, the Montreal Heart Institute, the Montreal General Hospital, Leucan, the Canadian Red Cross, the Canadian Cancer Society, Centraide of Greater Montreal and the Jean Paul Riopelle Foundation. He is Chairman of the Fondation Baxter & Alma Ricard, a member of the Chairman’s International Advisory Council of the Americas Society, Honorary Chairman of the Canada China Business Council, and a member of the Trilateral Commission and several China-based organizations.