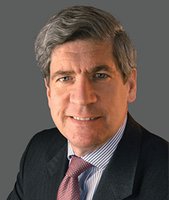 Mr. Graham is Vice-Chairman and a director of Wittington Investments, Limited, an investment management company and the principal holding company of the Weston-Loblaw Group. He also serves as Chairman and a director of Choice Properties Real Estate Investment Trust. From 2000 to 2014, he was President of Wittington Investments. Prior to joining Wittington, he held senior positions in Canada and the U.K. with National Bank Financial Inc. (formerly Lévesque Beaubien Geoffrion Inc.), a Montréal-based investment dealer.

Mr. Graham is Chairman of the Ontario Arts Foundation, Charter for Business, Duke of Edinburgh Award Canada and of the Shaw Festival Theatre Endowment Foundation. He is also currently a Board Member of the Art Gallery of Ontario, the Canadian Institute for Advanced Research, St. Michael’s Hospital, the Trans Canada Trail Foundation and Luminato.

Mr. Graham is Honorary Colonel of the Royal Regiment of Canada. In 1998, he was awarded the Government of Ontario Volunteer Service Award. In June 2007, he received an Honorary Doctor of Laws degree from Brock University.