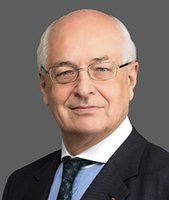 Mr. de Seze has been Vice-Chairman of Power Financial since 2010. Prior to that, he served as a director of Power Corporation from 2001 and as a vice-chairman from 2008. He is Chairman of the Supervisory Board of PAI partners, a private equity fund management company, of which he was President and Chief Executive Officer from 1998 to 2007. He was a member of the Executive Committee of BNP Paribas, one of Europe’s largest banks, until 2004.

He serves on the board of directors of several European-based companies, including Groupe Bruxelles Lambert, Pargesa, and BW Group. He is a member of the International Advisory Board of Hakluyt & Company. He joined the Paribas group in 1993 as a member of the Management Board of Banque Paribas and Compagnie Financière de Paribas. Before that, he held senior positions with Volvo Group, including as a member of the Management Board of AB Volvo in Sweden. He was also a director of Thales (from 2009 to 2013), of Publicis (from 1998 to 2016), of Imerys (from 2009 to 2016) and of Carrefour (from 2005 to 2017).

Mr. de Seze serves on the board of the Fondation Un Avenir Ensemble in France, whose mission is to assist students from economically disadvantaged environments and to facilitate first-time employment.