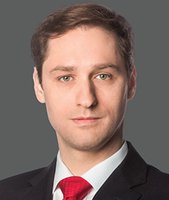 Mr. Desmarais has been Senior Vice-President of Power Financial and Power Corporation since 2017. Prior to joining Power as Vice-President in May 2014, he was Director of Business Development at Square Victoria Digital Properties. From 2010 to 2013, he worked as an Associate at Putnam Investments. While completing his Law degree, Mr. Desmarais was an articling student at Heenan Blaikie LLP and also worked as an analyst at Pandion Investments.

Mr. Desmarais serves as a director of Canada Life, IG Wealth Management and Mackenzie since May 2014. He is Chairman of Power Energy Corporation and a director of Lumenpulse.

In November 2018, he was named Chair of the Canada China Business Council. He is also a member of the board of the Montreal General Hospital Foundation and the Canadian Institute for Advanced Research.

Mr. Desmarais holds a Bachelor of Civil Law degree from the University of Ottawa and a Bachelor of Arts in Sociology and Political Science from McGill University. He has been a member of the Québec Bar since 2009.